In contrast to many gay people, lesbian persons and also bisexual women are often not perceived, one speaks of Lesbian Invisibility. To this day, there are few visible lesbian role models – especially in the business context. In many networks lesbian persons are in the minority. As a result, there is a lack of role models for new and younger colleagues. Through the cross-network and cross-sector campaign #theLworksout on April 26, we can empower openly lesbian people and together create visibility through a large number of participants, as well as highlight the diversity of lesbian people.

HOW CAN I PARTICIPATE IN THE campaign?

Position yourself and your company as a supporter of the campaign and for lesbian visibility and call on employees to participate.
The campaign was initiated jointly by the PROUT AT WORK-Foundation and LGBT*IQ business networks. The Lesbian and Gay Association (LSVD) and Wirtschaftsweiber e.V. support the campaign.

The Frankfurt University of Applied Sciences recently published a study on the situation of lesbian women in the workplace under the direction of Professor Dr. Regine Graml and with the collaboration of Prof. Dr. Tobias Hagen and Prof. Dr. Yvonne Ziegler. It discusses the intersection of homophobia and sexism and sheds light on the situation of working lesbian women in Germany in the application process and in working life.

The results of the study as well as recommendations for action for companies to eliminate discrimination were compiled in the brochure published by the Frankfurt University of Applied Sciences, the Bundesstiftung Magnus Hirschfeld, Wirtschaftsweiber e.V. and the PROUT AT WORK-Foundation.

You can now download thee study as a PDF and also order a printed copy. Both versions are only available in German. 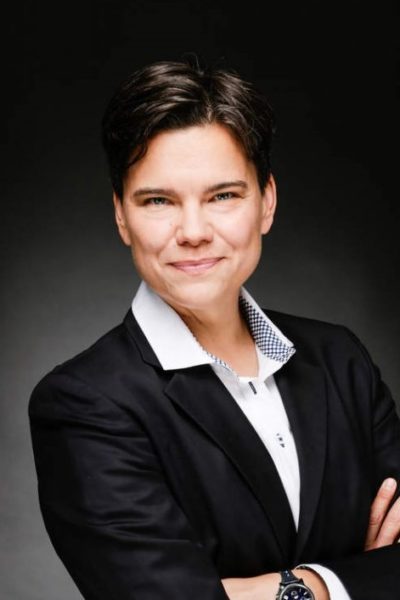 A talk with… Patricia Schaller

“An employee performs better when he feels safe and accepted and he can put all his energy into work and not into hiding.”

You speak up for the visibility of lesbians, in the jury of the OUT EXETUIVES, as well as in other places, like the Wirtschaftsweiber. Why is the glass ceiling in professional life particularly thick for lesbians?

Patricia Schaller: Lesbian women hit the glass ceiling in their working life in a double sense: as a woman and as a lesbian. Firstly, women are still underrepresented in management levels, and there is a tough battle for binding legal quotas at all levels. Secondly, the new edition of the study “Out im Office?!”  shows that 30.5 percent of LGBT* persons still conceal their own sexual identity at work. This is an energy-intensive game of hide-and-seek, to the detriment of both sides, employees and companies.

How can companies create an environment in which people with a LGBT*IQ background feel safe?

Patricia Schaller: With a professional Diversity Management, that is anchored deeply in the organisation, role models and supporters from the highest management levels and a clear positioning for diversity in internal and external communication.

And how dies this pay off in terms of the performance of both individuals and the company?

Patricia Schaller: Diversity pays off. An employee performs better when he feels safe and accepted and he can put all his energy into work and not into hiding.

A talk with… Stephan Meier