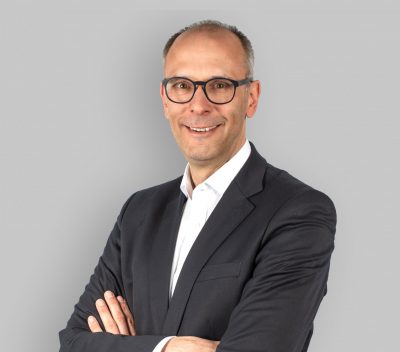 “As the Group’s German division, we also want to take a stand and to position ourselves clearly against discrimination.”

Stefan Falk, who was born in 1968, has been head of the Fire Protection Solutions Group since 2005. After completing his engineering studies, he started his career in 1994 at a large provider of fire protection solutions, which he left after six years in various management positions. In 2001, he joined Calanbau Brandschutzanlagen GmbH and was appointed as its managing director in 2004. Under his leadership, additional companies were acquired in the same market segment and consolidated in the Fire Protection Solutions Group.
On 1 January 2016, Stefan Falk was appointed as managing director of VINCI Energies Deutschland Schutzsysteme and became chairman of the management of the G+H Group.
Since 2017, he has been managing director of VINCI Energies Deutschland together with Frank Westphal.

What prompted you to become a PROUT EMPLOYER?

Stefan Falk: Our VINCI Group pursues a determined policy of equality that takes action against any form of discrimination in employment and occupation. Diversity is valued and promoted at VINCI. As the Group’s German division, we also want to take a stand and to position ourselves clearly against discrimination.

Can you tell us about an initiative regarding equal opportunities in the workplace for LGBTIQ people that has already been successful in your company?

Stefan Falk: Specifically, we supported a person on their journey to coming out. We would like to offer all employees equal opportunities and give them the chance to come out and be able to communicate openly.

“We want to demonstrate that this issue is important to us. Equal opportunities is not just a slogan, but something we commit to every day.”

How are you hoping to get specific support from PROUT AT WORK?

Stefan Falk: We would like to use the network to share experiences with other companies and to be able to continue to make progress ourselves.

What objectives are you pursuing with the PROUT EMPLOYER cooperation?

Stefan Falk: We want to demonstrate that this issue is important to us. Equal opportunities is not just a slogan, but something we commit to every day.

What activities are there at VINCI Energies Deutschland with regard to LGBT*IQ diversity?

Stefan Falk: As demonstrated by the VINCI Ethics Charter and many other measures, the subject of diversity is now an integral component of our manager training programmes. In France, VINCI has a network of more than 200 diversity officers whose main duty is to sharpen awareness and to hold diversity training in the individual divisions and companies of the group. We now want to promote and support this topic in Germany.

Why is it a matter close to your heart to support LGBT*IQ?

Stefan Falk: Because I have experienced in my private and professional life that people find it hard to talk about being different and are reserved in their working environment. Employees who are happy and feel comfortable are able to work more successfully.

Mr Falk, many thanks for talking to us!