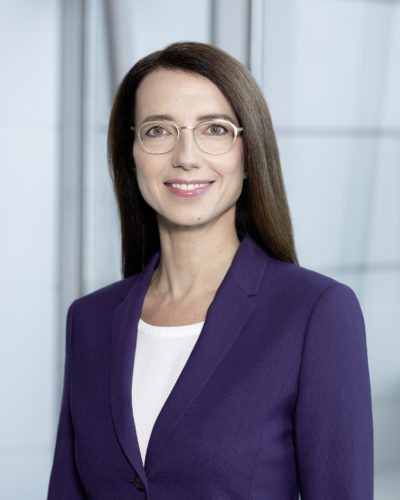 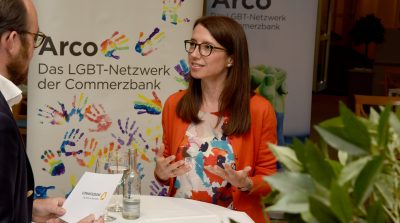 “It has to become normal for heterosexual and homosexual people to be able to interact in a relaxed way with one another – in both directions.”

Jenny Friese, the board member with responsibility for private and corporate clients in the East region, was born in Berlin and completed an apprenticeship in banking at Deutsche Bank. Since 1999, she has held various management roles. In 2007, she moved to Commerzbank and became head of the Berlin City-West region. Later, she headed up wealth management in Berlin and eastern Germany. Since 1 February 2015, Jenny Friese has been the board member with responsibility for supporting private, corporate and wealth management clients in the market region East.

Ms Friese, Commerzbank marked the 7th German Diversity Day in late May with numerous activities nationwide. The market region East has been particularly active in 2019 – why is that?

Jenny Friese: Because diversity is just unbelievably important to me! For four years, I have been a member of the Global Diversity Council for the Private and Corporate Clients segment (see info box) and in this capacity I would like to be a role model and offer guidance, especially on the topic of “women in management”. In particular during challenging times, it is important to understand, accept and support people, with all their differences and strengths. On Diversity Day, we invited colleagues and clients to an evening event with a very interesting panel for a stimulating discussion on the topic of “Why is a commitment to LGBT issues a success factor for companies?” The feedback showed that this first step of our “Journey to Berlin” attracted people’s attention.

“For me, „living diversity“ is a personal conviction. It enables us to perform better and makes us more creative and at the same time more human.”

You mention the “Journey to Berlin”. What is that?

Jenny Friese: Over the course of my career, it has become clear that heterogeneous teams are usually the more successful ones. It was therefore important to me to further develop this approach. However, having diversity “decreed” as part of the human resources strategy is not enough – I make the case for managers at Commerzbank taking an interest in the issue, being tolerant and open and showing this in their everyday work. This is the only way that everyone at our bank can feel comfortable and develop themselves fully. In addition, employee networks help to support such a corporate culture and to offer new perspectives through people sharing their own experiences. When the spokesman for our employee network Arco (see info box), Holger Reuschling, asked me late last year whether I would be willing to take on the role of patron championing the issue of LGBT even more strongly within senior management, my interest was quickly sparked. From the initial discussions, joint ideas were developed, which were implemented conceptually this year in the “Journey to Berlin”. The term “journey” has a symbolic meaning. We are setting off with different events in order to make the issue visible and ensure an environment that is free of discrimination.

At the events held to date, you emphasised several times that living diversity is “close to your heart”. How do you show your commitment personally?

Jenny Friese: For me, “living diversity” is a personal conviction. It enables us to perform better and makes us more creative and at the same time more human. All of this is good for our personal and professional development. As managers, we can set an example here, too, and make a difference. For that reason, I personally attend many events, raise awareness of the issue and seek dialogue with others. In my current role, I have the opportunity to lend even more weight to my messages and ensure even greater attention is paid to the topic of diversity. Prejudices are not entirely unfamiliar to me either. Therefore, I feel obliged to make the case for openness and tolerance. It has to become normal for heterosexual and homosexual people to be able to interact in a relaxed way with one another – in both directions.

What advantages does such a culture of openness bring to Commerzbank and its clients?

Jenny Friese: As a company we in fact benefit very much from this. Studies show that employees’ performance is significantly higher if they are in a working environment that is free of prejudices. When searching for the best talent, we present ourselves as an open, modern and tolerant company. It has been proven that young LGBT job seekers pay very close attention to these values when choosing an employer. In addition, teams that maintain a culture of openness tend to be willing to tread new paths and to advance innovations. Our clients are making similar observations. Purchasing decisions are often influenced by how a company is perceived. When it comes to having a welcoming culture, we know from experience that LGBT people as well as their family and friends are particularly sensitive. At the same time, the group is considered particularly lucrative in terms of its purchasing power.

“LGBT is not a private attitude, but rather a sexual orientation that a person does not choose. This mistake very often leads people in the wrong direction. It is precisely for this reason that I can only recommend that everyone comes to grips with this issue.”

Sounds encouraging. On the other hand, studies also show that, compared to other countries, young employees in Germany in particular are less likely to take the risk of coming out. They are afraid it will disadvantage them in their careers. This is the case despite all the efforts made to promote diversity. What are we still doing wrong here?

Jenny Friese: Traditional corporate structures often cannot be changed overnight. And it is important in this process to include all levels of management, to raise their awareness, educate them and break down inhibitions. The colouring of our logo during the Christopher Street Day season in 2018 and the lively discussion of this that took place on Comnet showed that, despite our culture of openness, there are still a lot of reservations and unease. The activities are often aimed solely at the LGBT target group. However, shared events and measures such as the “Journey to Berlin” help to overcome these difficulties. To do this, we also need people who have the courage to go public and thus act as role models for other colleagues.

Is one of the reasons for this perhaps that sexual orientation is seen as a private matter?

Jenny Friese: LGBT is not a private attitude, but rather a sexual orientation that a person does not choose. This mistake very often leads people in the wrong direction. It is precisely for this reason that I can only recommend that everyone comes to grips with this issue. A homosexual person who won’t come out for fear that it will damage their career will never introduce the person they love to their colleagues and will always have to lie during conversations about the weekend or holidays. It’s not about discussing sexual preferences. But while male heterosexual colleagues can have a picture of their wife on their desk and can bring her to evening events or shared team activities, this normality is denied to a homosexual colleague who is not out. However, being able to openly talk about one’s private life is part and parcel of a human and positive environment. Arco’s experiences have made it clear to me once again that, in our company, too, there are still people who are not living openly and who do not disclose their sexual orientation to colleagues and, above all, to their supervisors. Despite the culture of openness, there are still no high-level managers who, through their visibility, can resolve the supposed contradiction between being out and having a successful career.

And how do you see the future? Where will we be on the 10th Diversity Day in three years’ time?

Jenny Friese: My wish is that by then we can successfully make the case for diversity. In addition, it would be fantastic if more and more people – regardless of their sexual orientation – take an interest in one another and interact with each other in an open, tolerant manner at every level and in every direction.