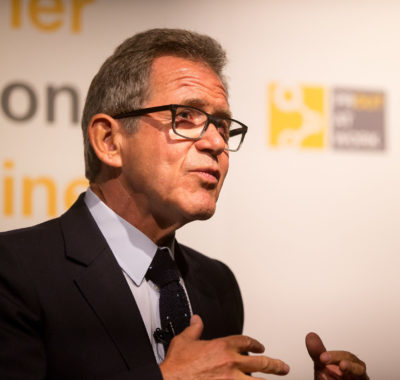 Coming-outs are still rare in the business sector, especially among executives […]. There is a dearth of role models who are prepared to be honest about their sexual identity.

Whenever the former CEO of BP and now Executive Chairman of the oil investment company L1 Energy, John Browne makes an appearance, things often get emotional – a rare state of affairs in the world of business. In his Hamburg keynote speech to business leaders, Lord Browne (68), who was born in Hamburg, spoke of his life and of his decades-long hiding. His mother, a survivor of Auschwitz concentration camp, had imprinted him at a young age that it was dangerous to tell someone a secret and to be an identifiable part of a minority. Browne followed this council until his forced outing in 2007. In his 41 years at BP – 13 as Chief Executive, during which time BP became one of largest companies in the world – he was leading a double life: one for the public and a private one as a homosexual man. Concealing his true identity demanded constant vigilance, Lord Browne said. These days, he believes hiding one’s identity is not a good idea. It costs people a great deal of energy and creativity, which, in the working world, is ultimately a loss for the company.

Research in his book, The Glass Closet: Why Coming Out Is Good Business, found that the value of companies with authentic and open-minded board members is significantly higher than for those with board members representing traditional conservative views. The economy and society as a whole have been proven to benefit from tolerant corporate cultures, Brown said in his emotional keynote. He presented his case to the attending DAX board members and top executives: The logic of companies is to bring people together. Therefore, it is only logical – and important – that global corporations and large companies become champions for diversity and inclusion, openly communicating and always putting diversity on the agenda, in order to create a fear-free work environment. Coming-outs are still rare in the business sector, especially among executives, the charismatic Browne noted. There is a dearth of role models who are prepared to be honest about their sexual identity.

In his Q&A session, Lord Browne asked: how many openly-gay board members there are in the S&P 500 Index? The answer: just one – Tim Cook, the CEO of Apple.

As one of the most successful managers in the world, John Browne made the conscious choice, after his ex-partner outed him, to become a role model and to encourage others to stand up for themselves and define their own paths.

Brown explains his commitment as simply “doing the right thing”. That’s why he now writes books and is active in the public sphere. From his own experience, he knows too well that the business sector is a “special place” and very conservative. Changes take time and perseverance.

In Germany to date, only one top corporate executive has come out as gay: the Managing Director of Telekom Deutschland, Niek Jan van Damme.

“This was my first PROUT AT WORK event that I was encouraged to join, because I was really interested to hear Lord Browne. He is really interesting as a person and a very credible person to speak about inclusion in the corporate environment. He gave us lessons which I hope we can take home to our own companies.”

Guests at DINNER BEYOND BUSINESS, many of whom had travelled to Hamburg specially to attend the event, expressed how moved there were by Lord Browne’s speech. Robin J. Stalker, the Chief Financial Officer at Adidas, remembered his first encounter with the LGBT movement, saying that at first he had to take time to think about their concerns, but now he identifies with them absolutely. “This was my first PROUT AT WORK event that I was encouraged to join, because I was really interested to hear Lord Browne. He is really interesting as a person and a very credible person to speak about inclusion in the corporate environment. He gave us lessons which I hope we can take home to our own companies.”

Lord Browne’s half-hour speech was followed by an exceptional dinner, which lasted until late in the evening, during which interesting discussions and new contacts developed.

Janina Kugel, a member of the Management Board and the Human Resources director of Siemens AG, said she planned to attend the next DINNER BEYOND BUSINESS too: “I met a very open-minded group of representatives from different companies. And all of us think that this topic is important. We want to push it forward, so that workplace diversity gains public awareness in Germany. Because when you think it over, we’ve got some catching-up to do: we need to find people who say, ‘yes! I’m part of the LGBT community and I’m proud of it. I am who I am, and I don’t hide. ’”

Norbert Janzen, Human Resources director and member of the management board at IBM, was also enthusiastic about the idea of the evening: “I have a great affinity for openness, and I love this kind of exchange between companies, because I believe we can learn a lot from each other. And the platform offered here is phenomenal. Combining that with an after-work dinner and with such an inspiring guest is outstanding. I’m going to take a lot with me and bring it back to the company.”

The event with Lord John Browne in Hamburg is the opening event for the DINNER BEYOND BUSINESS series. In a relaxed atmosphere and with a first-class menu, a select circle of corporate executives meet with the directors and founders of PROUT AT WORK. The keynote by a renowned speaker creates a framework for inspiration and exchange on new perspectives of corporate culture. These special events are held at irregular intervals.

Video of the Speech of Lord Browne:

Read more about the DINNER BEYOND BUSINESS 2017

Learn more about our DINNER BEYOND BUSINESS